Pension & Investment Partners LLP offer expert financial advice and planning which is completely independent. Our dedicated
team of expert qualified advisers and administrators have a proven track record of success, and a depth of experience resulting
from numerous years within the Financial Services Industry.

With our independent status, offering whole of market options, Pension & Investment Partners LLP is in a position to continually
offer new products and investment opportunities to ensure that all your requirements are managed and serviced to the highest
standard and exclusively to your satisfaction.

How many companies will need help with automatic enrolment?


Posted by Pension & Investment Partners LLP at 07:12 No comments:

The Auto-Enrolment pension scheme legislation could prove “a significant operational and financial burden on small retailers,” the ACS has warned.

Under the scheme, which started being rolled out by the government in 2012, all staff must be enrolled in a pension when starting employment unless. Many convenience stores will have to start enrolling their staff from June 2015.

Employers will be required to pay 1% of an employee’s annual earnings into the pension scheme. This rises to 3% by 2018.
“Retailers are facing increased costs in many areas of their business, including above-inflation increases in the minimum wage and changes to statutory sick pay regulations,” said ACS CEO James Lowman.

“Auto enrolment has the potential to be a significant operational and financial burden on small retailers, and we are keen to work with the Department of Work and Pensions to minimise the costs of implementation while ensuring that all retailers are aware of what is required.”

In its submission to the Work and Pensions Select Committee, the ACS said nearly half of micro employers did not know the exact date when they needed to comply, leaving them at risk of financial penalties because of non-compliance, and disproportionately affecting the smallest businesses in the convenience sector.
It also said the high administrative cost of dealing with very small pension contributors meant pension providers were more likely to reject smaller employers.

For the original article, go to: http://www.thegrocer.co.uk/people/people-news/acs-warning-on-auto-enrolment-pensions-for-smaller-retailers/373249.article

The clear message is Don’t get caught out. Act sooner rather than later.

We can help you fulfill your Auto-Enrolment legal duties. Please phone Bernard Macken on 0113 202 9529, or e-mail bfm@pipllp.co.uk Please also visit our website www.pipllp.co.uk
Posted by Pension & Investment Partners LLP at 07:10 No comments:

The quarterly report includes details on particular areas of non-compliance and highlights common misunderstandings by employers about their duties.

As the number of employers staging rises significantly, we expect to see an increase in how often we need to use our statutory powers. This is based on our research among medium, small and micro employers, which shows that these employers are more likely to leave Automatic-Enrolment preparations until closer to their staging date. We believe that this is likely to lead to more employers being non-compliant with their duties.

As Automatic-Enrolment celebrated its second birthday, we launched a major nationwide media campaign aimed at raising awareness among smaller employers and their advisers. Look out for our advertisements in the press, online and on radio.”

Don’t get caught out. We can help you fulfil your Auto-Enrolment legal duties. Please phone Bernard Macken on 0113 202 9529, or e-mail bfm@pipllp.co.uk . Please also visit our website www.pipllp.co.uk #BeyondBetter

Posted by Pension & Investment Partners LLP at 07:08 No comments:

The Pensions Regulator’s (TPR’s) latest quarterly update on its investigations into Auto-Enrolment confirms that it has served three firms with £400 fixed penalties for failing to comply with an unpaid contributions notice or a compliance notice.

It can only get worse because, whilst more than 33,000 large and medium sized employers have already begun auto-enrolling staff, there are a further 1.25 million due to hit their staging dates over the next three years. There is a huge capacity crunch looming, as there will be an insufficient number of advisory firms available to help these employers comply with their legal duties. The message has to be, act early before the tsunami hits.

“As we deal with smaller employers, we will see more who, despite our message to prepare early, leave it too late or do not comply at all. This type of non-compliance is not acceptable. We expect to see the number of times we need to use our powers increase.

The regulator has a range of powers to tackle non-compliance including serving fixed penalty notices and escalating daily penalties notices.”

We can help. Please phone Bernard Macken on 0113 202 9529 or e-mail bfm@pipllp.co.uk. Please visit our website www.pipllp.co.uk
Posted by Pension & Investment Partners LLP at 06:59 No comments:

“As our knowledge of employer behaviour has developed over the past two years so has our intelligence and resource allocation to tackling non-compliance. We adopt a risk based approach in targeting our resources where they have the most impact and, although the number of investigations has risen, we have been very successful in working with employers to remedy breaches where they have occurred, without needing to use our statutory powers.

“We have also taken proactive steps working with high-risk employers to prevent non-compliance. Where we have taken enforcement action by issuing a compliance notice, this has given employers the necessary wake-up call to provide the pensions their employees are due.”

The regulator has a range of powers to tackle non-compliance including serving penalty notices of up to £10,000 a day for the largest employers, but is yet to fine a firm.

We can help with you’re A-E problems. Call Bernard Macken on 0113 202 9529 or e-mail me on bfm@pipllp.co.uk. Please visit our website www.pipllp.co.uk
Posted by Pension & Investment Partners LLP at 06:09 No comments:


The Pensions Regulator (TPR) issued an announcement earlier this year, encouraging small and medium-sized employers to check when they are required to Auto-Enrol, after awareness and understanding research indicated that 47 per cent did not know when they needed to act.

Information released then by the Regulator under the Freedom of Information Act indicated there were 134 breaches of Auto-Enrolment duties between October 1 2012 and January 31 2014.

This resulted in 129 instances of informal action being taken, including instructions via telephone, email, in person, and warning letters. The Regulator also took formal action, which included issuing four compliance notices and one unpaid contribution notice, but at the time of the announcement, no fines had yet been issued.

Charles Counsell, executive director of Auto-Enrolment at the Regulator, said the watchdog has concentrated on creating a “pro-compliance culture”, so that employers have the information they need in order to comply with the requirements.

“We are also working with employers to rectify anything that has gone wrong,” he said. “We have only needed to use our statutory powers six times, but we are not complacent and realise that the greatest challenge remains ahead with small and micro employers.”

For employers concerned about this, we can help. Contact Bernard Macken on 0113 202 9529, or e-mail: bfm@pipllp.co.uk
Posted by Pension & Investment Partners LLP at 04:48 No comments:

Are your employees among the 4 million plus Auto-Enrolled? If not, we can help:


More than four million workers from over 21,000 employers are now successfully enrolled into workplace pensions and are saving for their futures.

The latest figures are published in The Pensions Regulator’s (TPR) monthly Declaration of compliance (registration) report . Thousands of small and medium-sized businesses are now complying with the new laws every month as Auto-Enrolment gathers momentum

To find out more about Auto-Enrolment and how we can help, please contact Bernard Macken on 0113 202 9529 or bfm@pipllp.co.uk .
Posted by Pension & Investment Partners LLP at 04:47 No comments:

Banks are reluctant to lend to small businesses....

Banks are reluctant to lend to small businesses. Pension led funding may provide a solution – see attached. We can help. bfm@pipllp.co.uk 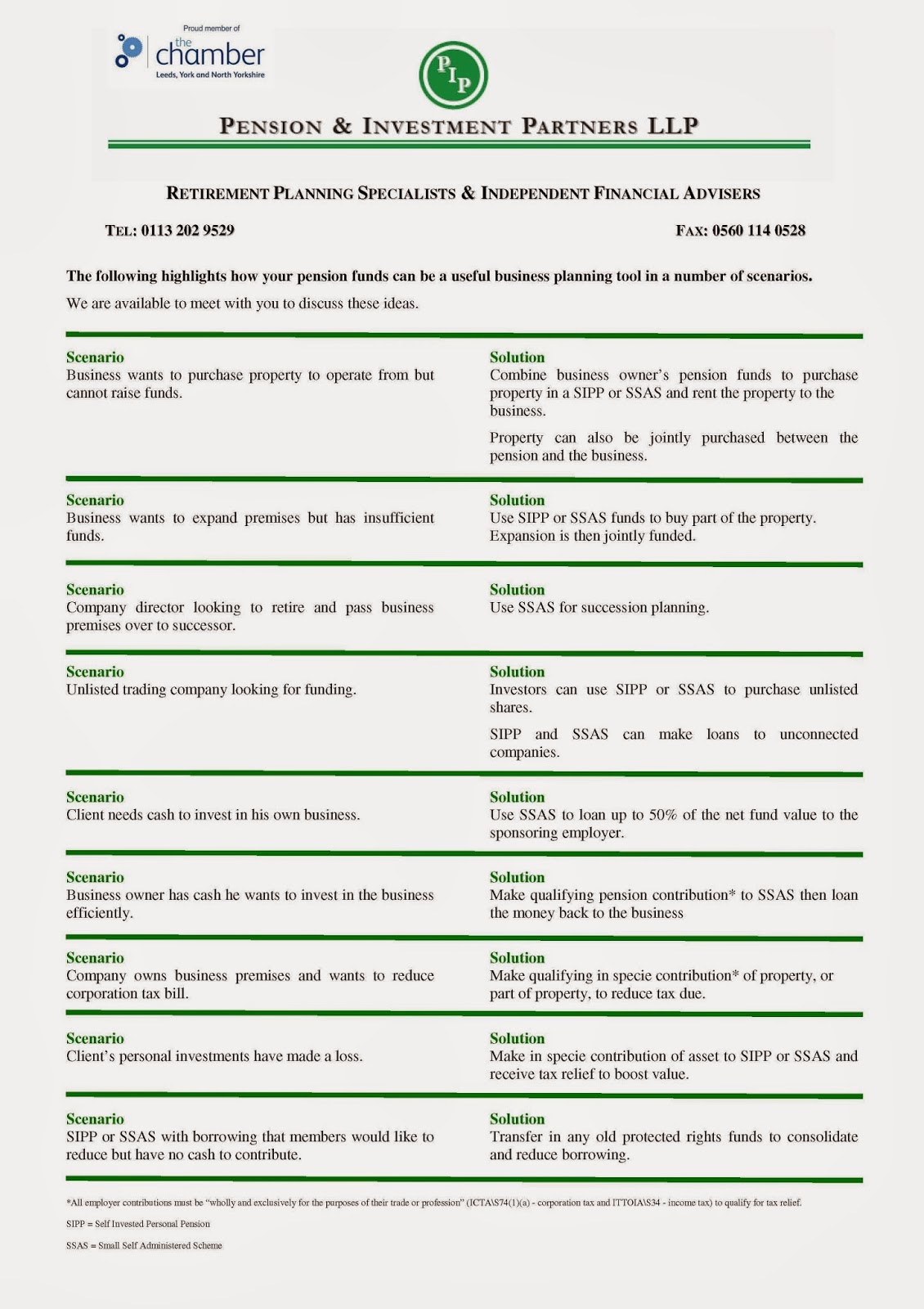 Posted by Pension & Investment Partners LLP at 03:27 No comments:

Updated statistics on the numbers of employers becoming subject to automatic enrolment duties over the next four years have been released today.

The forecast shows how many employers reach their staging date each quarter have made them available to help the pensions industry plan and prepare to meet their clients’ needs.

The figures underline the scale of the challenge ahead, with around 30,000 medium-sized employers (50-250 workers) reaching their staging date between this April and the end of the year. 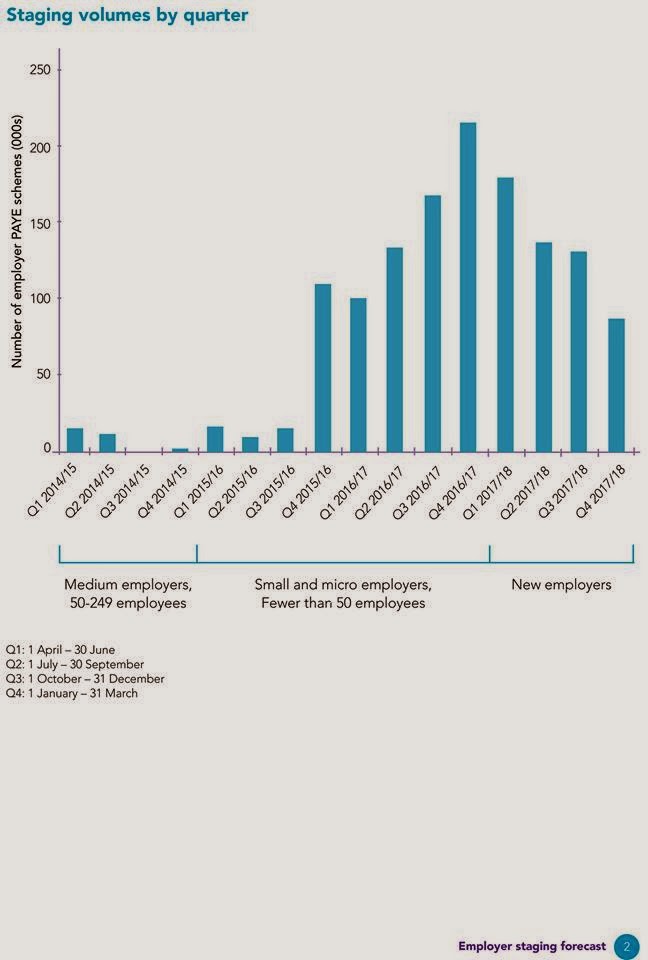 Posted by Pension & Investment Partners LLP at 06:49 No comments: